Washington State Amanita Muscaria mushrooms are the most sought after of the specimen, you will be pleased!

The 2021 Harvest was less abundant this year, so we are only selling our A+ Washington Amanitas in smaller quantities (2oz and lower) so as to ensure everyone has a chance to explore these mushrooms throughout the year! If you’re intent on working with WA amanita this year we encourage you to order some before they run out.

These are awesome grade A+ Amanita Muscaria caps picked in Washington state. Very pretty ranging from orange/yellow to bright red. Absolutely beautiful cap specimen and no stems! These are the most desired strain and are usually crazy expensive…

A+ Amanita Muscaria purchases will be mostly intact caps, with some cap pieces. The cap colors will range from brilliant to average with A+ grade caps. If you’re interested in acquiring an ounce of only the most brilliantly colored specimen, check out our A² Washington Caps before they sell out! 🙂

It’s always an honor for us to have Amanita Muscaria available for those in need. This plant has taught us so much here at Eternity in a Box and is a a teacher which we hold in the highest of regards.

These were used traditionally in Siberian shamanism. They also have a common mythical connotation in stories such as Alice in Wonderland, and are often used as a symbol for ‘otherworldiness’ in illustration. Read about the roots of the Santa Claus tradition in relation to these mushroms, ha pretty mindblowing stuff.

Not for human consumption! 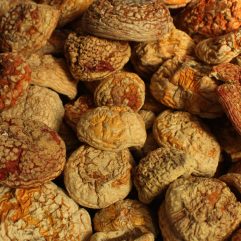