We are proud to now be able to offer some very rare jungle vine specimen! It is very exciting to be holding these very rare plants, not much is known about them in the western world at all! We encourage you to read more about this and our other rare jungle specimen 🙂

This listing is for Shredded Black Vine~

What’s particularly unique about this vine though is that it is sometimes brewed without other plant specimen (unlike other Aya brews which involve vine and leaf of different species)…It is said that the leaves contain similar compounds to those found in Psychotria Viridis. Some natives brew P. Viridis leaf with both Black Caapi leaf and vine into a brew together, some leave out the P. Viridis altogether…Very fascinating!
It is said by the natives to be the strongest of the Ayahuasca vines. Sometimes this black vine is used in small amounts, in conjunction with other jungle vines to further potentiate the medicine of ayahuasca.

Banisteriopsis Caapi and related jungle vines have been used as a medicine in South America for thousands of years, and are revered as one of the most powerful plant-medicines in the world. Traditionally it is brewed by the shaman, with the Psychotria Viridis leaves into a concoction known as Ayahuasca. This drink is used in rituals for healing physical ailments as well as taken as a means of connecting with the Spirit to learn what is right for ones self. It is unique in that out of all the powerful psychoactive plant medicines in the world, ayahuasca is the only one which is prescribed to even children, pregnant women and the elderly as it is believed to be inherently healing to the body regardless of the psychoactive ‘journeying’ that parallels.

This vine was grown in Peru and was harvested within the month! Super fresh and in whole form as to minimize oxidation.

*Not for human consumption* this vine contains the psychoactives Harmala and Harmaline, powerful MAOI chemicals which are psychedelic in nature. This is being sold for ritual incense use or for the honoring of the plant-spirit without consumption. It is an awesome plant to have around, and will make a powerful addition to any meditative alter. 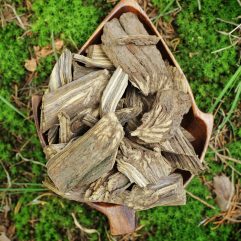