This root has been used in Russia for hundreds of years to promote healthiness and well being. It has also been used in China for just as many years earning it the name there as the ‘king of adaptogens’.

Eleuthero is a plant that is native to Siberia, and some parts of Asia, whose root is considered a ginseng. This root has been used in Russia for hundreds of years to promote healthiness and well being. It has also been used in China for just as many years earning it the name there as the ‘king of adaptogens’. As an adaptogen, Eleuthero Root can promote well being by helping our bodies defend against our sometimes toxic environments. As the word adaptogen would suggest, they help our bodies adapt and better react to toxins and stresses in our environment that cause our immune systems to overreact. These range from toxins in the air we breath and the water we drink, to stresses in the work environment and emotional stresses that we deal with daily. The adaptogenic qualities of Eleuthero Root keep our bodies immune system from being over stimulated by these toxins. The over stimulation of the immune system can lead to fatigue, and an overall weaker immune system.

As well as being a great adaptogen, Eleuthero Root is a great ginseng that can enhance energy levels and raise endurance. Consumed Eleuthero Root can lend energy and promote healthy blood pressure and blood sugar levels. Lending its energy boosting qualities and helping to maintain a healthy cardiovascular system, this root can over time, raise endurance levels, and give you more sustainable energy! In fact Russian scientists were so interested in Eleuthero Roots capabilities that they performed secret research to find out if it could boost their military by strengthening their soldiers, and increase athletic performance! Many of the results of the research were held secret; however, in the 1988 Olympics, Russian athletes used Eleuthero Root while training, and it may have lead to their dominance in many of the Olympic games.

We have enjoyed the energy that this powerful ginseng has lent us, and hope that Eleuthero Root can also give you the energy you need and help you maintain a healthy body and mind!

Adaptogen: Eleuthero Root can help your body deal with the toxins and stresses of every day life, so you can maintain a healthy body

Energy Booster: As a powerful ginseng this root has the ability to raise your energy and endurance levels.

Immune System Support: As an adaptogen Eleuthero Root can help your immune system from being over stimulated and help reduce the occurrence of, and fight common colds.

Tea: A tea can be made by steeping 4 to 5 grams of Eleuthero Root in a cup of hot water. This tea can be consumed once a day.

Encapsulated: This root can be powdered and encapsulated, to take 3 to 4 grams once per day.

Precautions and Side Effects:

Do not use Eleuthero Rood if you are pregnant or breastfeeding.

Do not use Eleuthero Root if you have high blood pressure, kidney, or liver disease.

Do not use Eleuthero Root with stimulants such as coffee, mate teas, ephedra, and energy drinks.

Avoid use of Eleutero Root if suffering from insomnia.

Be the first to review “Eleuthero Root *Organic*” Cancel reply 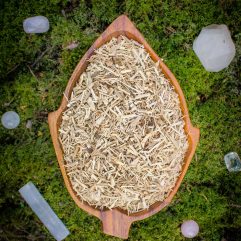