Peganum Harmala, commonly called Syrian Rue, is an herb native to the Mediterranean region and eastward across India. The seeds can produce a sought after dye called ‘Turkish Red’ because of their natural pigments. It was introduced into the United States in the early 1900s by a farmer growing them in New Mexico. Since then they have spread invasively up along the western coast of the US and have reached as far north as Montana.

These seeds have been used in ritual and as an incense for thousands of years. They contain Harmala and Harmaline, which have an inactivating effect on the MAO enzymes in the body. Because of this these seeds were traditionally used in conjunction with plants to produce visions and transcendental experiences.

These seeds compounds are relative to the same alchemy which activates the Chacruna leaves when used in conjunction with B. Caapi, the legendary Ayahuasca brew of the Amazon.

If you use these internally, consume with caution! The alkaloids present cause drastic changes in the way the body processes various chemicals…can be very dangerous and even deadly in combination with pharmaceuticals or alcohol. Do you research and be safe 🙂 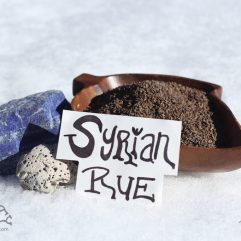