We are now offering Charcoal Tablets to use for burning our Ritual & Ceremony herbs. You can buy a single Roll on the drop-down menu of this plant, or check the link to buy in bulk!

Frankincense, also called olibanum, is an aromatic resin used in incense and perfumes, obtained from trees of the genus Boswellia in the family Burseraceae, particularly Boswellia sacra (syn: B. bhaw-dajiana), B. carterii, B. frereana, B. serrata (B. thurifera, Indian frankincense), and B. papyrifera. The English word is derived from Old French “franc encens” (i.e., high quality incense).

Frankincense is tapped from scraggy but hardy trees by slashing the bark, which is called striping, and allowing the exuded resin to bleed out and harden. These hardened resins are called tears.

Frankincense is used in perfumery and aromatherapy. It is also an ingredient that is sometimes used in skincare. The essential oil is obtained by steam distillation of the dry resin. Some of the smells of the frankincense smoke are products of pyrolysis.

Frankincense is used in many Christian churches including the Eastern Orthodox, Oriental Orthodox and Catholic churches. According to the gospel of Matthew 2:11, gold, frankincense, and myrrh were among the gifts to Jesus by the biblical magi “from out of the East.” Christian and Islamic Abrahamic faiths have all used frankincense mixed with oils to anoint newborn infants, initiates and members entering into new phases of their spiritual lives.

Frankincense resin is edible and is used in traditional medicines in Africa and Asia for digestion and healthy skin. For internal consumption, it is recommended that frankincense be translucent, with no black or brown impurities. It is often light yellow with a (very) slight greenish tint. It is often chewed like gum, but it is stickier.

In Ayurvedic medicine frankincense (Boswellia serrata), commonly referred to in India as “dhoop,” has been used for hundreds of years for treating arthritis, healing wounds, strengthening the female hormone system and purifying the air. The use of frankincense in Ayurveda is called “dhoopan“. In Somali, Ethiopian, Arabian, and Indian cultures, it is suggested that burning frankincense daily in the house brings good health.

Frankincense oil can also be used for relief from stings such as scorpion stings.

For therapy trials in ulcerative colitis, asthma and rheumatoid arthritis there are only isolated reports and pilot studies from which there is not yet sufficient evidence of safety and efficacy. Similarly, the long-term effects and side effects of taking frankincense has not yet been scientifically investigated. Nonetheless, several preliminary studies have been published.

A 2008 study reported that frankincense smoke was a psychoactive drug that relieves depression and anxiety in mice. The researchers found that the chemical compound incensole acetate was responsible for the effects.

In a different study, an enriched extract of “Indian Frankincense” (usually Boswellia serrata) was used in a randomized, double-blinded, placebo-controlled study of patients with osteoarthritis. Patients receiving the extract showed significant improvement in their arthritis in as little as seven days. The compound caused no major adverse effects and, according to the study authors, is safe for human consumption and long-term use.

In a study published in 2009, it was reported that “Frankincense oil appears to distinguish cancerous from normal bladder cells and suppress cancer cell viability.”

A 2012 study in healthy volunteers determined that exposure to 11-keto-?-boswellic acid (KBA), a lead boswellic acid in the novel solubilized frankincense extract Boswelan, is increased when taken with food. However, simulations based on a two-compartment pharmacokinetic model with single first-order absorption phase proposed that the observed food interaction loses its relevance for the simulated repeated-dose scenario.

In a 2012 study, researchers found that the “behavioral effect [of insensole actetate] was concomitant to reduced serum corticosterone levels, dose-dependent down-regulation of corticotropin releasing factor and up-regulation of brain derived neurotrophic factor transcripts IV and VI expression in the hippocampus. These data suggest that IA modulates the hypothalamic–pituitary–adrenal (HPA) axis and influences hippocampal gene expression, leading to beneficial behavioral effects supporting its potential as a novel treatment of depressive-like disorders.”

In 2013, Leicester University researchers announced findings that AKBA (acetyl-11-keto-beta-boswellic acid), a chemical compound in the resin, has cancer-killing properties and has the potential to destroy ovarian cancer cells. The lead researcher from the University’s Department of Cancer Studies and Molecular Medicine announced the findings after a year studying the AKBA compound with ovarian cancer cell lines in vitro that showed it is effective at killing late stage cancer cells. Kamla Al-Salmani noted that among surprising findings were that some cells that had become resistant to chemotherapy were killed during the in vitro study. The efficacy of AKBA as a potential medicine for treatment of cancers (colon, breast and prostate) has been tested. The results are based on the preliminary and unverified findings of the laboratory study, which marked the first study to identify an ability to fight ovarian cancer. It is in early stages and, as of 2014, yet to be published in a peer-reviewed journal. 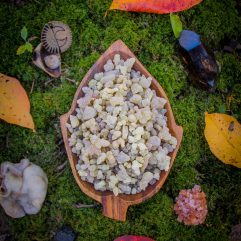