Traditionally, this sacred bark’s laxative and diuretic qualities have been used to clean the body, helping remove toxins from the intestinal tract, as well as the gallbladder and pancreas.

To the Native Americans the bark of the Rhamnus Pushiana tree has been known as “Sacred Bark”. Having served them well as a mild laxative and diuretic detox medicine, they shared the knowledge of this bark with the early Spanish explorers who gave it its more well known name, Cascara Sagrada, which means sacred bark in Spanish. Traditionally, this sacred bark’s laxative and diuretic qualities have been used to clean the body, helping remove toxins from the intestinal tract, as well as the gallbladder and pancreas. In fact Cascara Sagrada has worked so well for so many years that it is used in the production of most over the counter laxatives today! Our Cascara Sagrada is perfect for those seeking the pure unadulterated cleansing essence of mother nature, untouched by modern extraction methods. With the ability to help us keep our most sacred temple clean, it’s no wonder this bark has been known as sacred!

Diuretic. Stimulating natural secretions from the liver, pancreas, and gallbladder, Cascara Sagrada can help cleanse the urinary tract of build up of toxins.

Tea:2 to 5 grams of bark powder steeped in an 8oz cup of hot water taken 1 to 2 times daily as needed.

Capsuled. 2 to 3 grams of bark powder in a capsule 1 to 2 times daily as needed.

Because Cascara Sagrada is such a powerful herb one should always start with the smallest dosage until completely aware of how well it works with ones body.

Never take large amounts of Cascara Sagrada! All of our plants are special and need to be respected (like we respect our own bodies). Over use of any plant can be dangerous. Having said that, like with all diuretics and laxatives, it is important to drink plenty of water. Cascara Sagrada causes the body to dispel water quicker that usual, and can cause dehydration if one does not drink water. 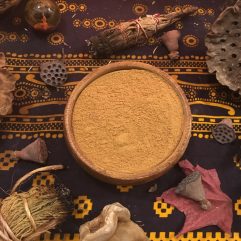